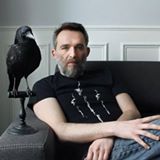 BARST is the moniker of Bart Desmet, a man who has played in several bands over the course of the years. However, it wasn’t until he pursued his solo output that he finally felt like coming home.

BARST is basically just a man and his guitar. Don’t expect any singer/songwriter music though. BARST wants to break out of the prescriptive and normative song structures, and tears down the walls between all sorts of genres, inviting the listener to create its own imaginary worlds. For this, BARST relies on a vast array of pedals, synths, samplers, drone tracks, drum computers and effects. He may be just a man and a guitar, but his sound is spatial and even orchestral. In fact, his work has been described as a one-man transcendental atmospheric black shoegaze math noise drone orchestra. Rather a mouthful, yet very much right on the mark. BARST truly soaks up all kinds of genres and musical styles, and shapes it in his own distinct and unique sound scapes. His practice is constantly evolving, and takes on many different, often, surprising forms. BARST’s quest is to produce some sort of transcendental aural art, in which he tries to materialize the immaterial. To reach this, he’s constantly interweaving his sounds with visuals and imagery. In time he even wants to incorporate things like taste and smell, truly ending up with a gesamtkunst that encompasses all senses.

BARST’s quest started with the release of a limited tape on Consouling Sounds. The tape was released on Record Store Day 2015, and coincided with a double bill with Treha Sekotori. This was no coincidence. BARST teamed up with Treha Sektori and RM74 to write a stunning collaborative album - which is due for release on the Garden of Drones festival mid August. In the mean time, BARST has played live on several occasions, and has some great projects lined up.